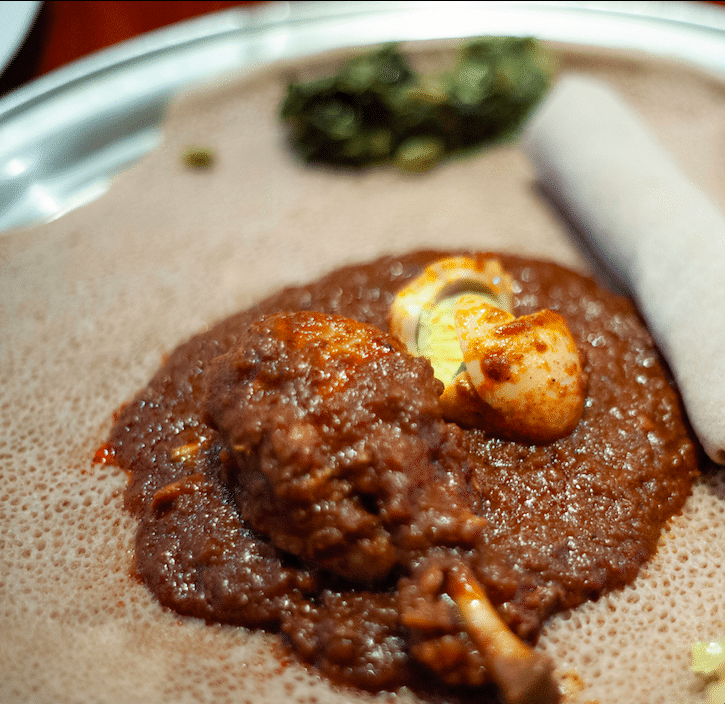 23 Dec Holiday dishes of the diaspora

The holidays bring out some of the best dishes the African diaspora has to offer. Whether you’re in Nigeria, Barbados or rural Tennessee, you’re likely to be eating good between December and the beginning of January. We spend days, weeks and sometimes months preparing feasts that help end one year and open another. And while, yes, this year’s holiday traditions will be different for most of us, our food will remain the same. In many ways, our plates are the epitome of perseverance, pride and a deep appreciation for the culture that sustains us all. 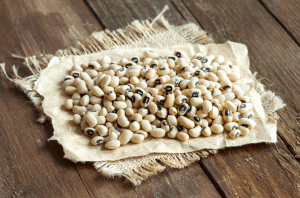 One would be hard-pressed to find a food more synonymous with Black American holiday traditions than black eyed peas, or Hoppin’ Johns. Black eyed peas are a staple of New Year’s Day dishes, especially in the South. And while the origin of the dish appears to have competing theories, one common thread is the idea that they serve as a symbol of luck for the new year. And if there was ever a year to not pass on your lucky charm it would be 2020. We need all the luck we can get heading into 2021.

The dish is commonly prepared through a process of slow cooking with diced onions and a piece of fatty pork for additional flavor. Over time, the peas swell, growing in size and flavor. It is then served with other New Year’s Day staples: cornbread and greens. 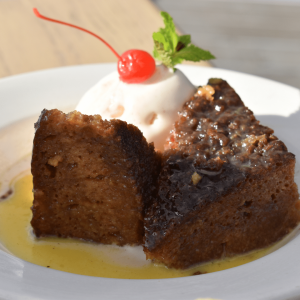 New The next dish on the list takes us around the world and into another hemisphere. Malva pudding, also called Christmas pudding, is a traditional South African dessert that brings together competing textures of deliciousness. There is the spongy consistency of the inside of the pudding, made with apricot, and the saucy outer layer created by pouring a cream sauce over the top while still hot. The result is an explosion of textures all working together to dance in rhythm with your taste buds. And because we have entered the Southern hemisphere, where Christmas is celebrated in the summer, malva is often served with a cold custard or ice cream. 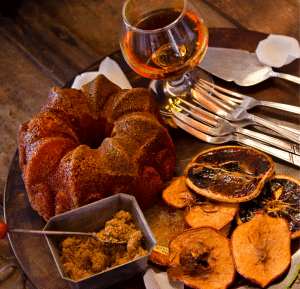 The Caribbean has its fair share of holiday dishes, but one that rises to the top is always rum cake a.k.a black cake a.k.a. Christmas cake. Rum cake can be found across the Caribbean: Jamaica, Belize, Barbados, Puerto Rico, the list goes on. Each country provides its spin on the classic recipe, but all variations keep rum as the star of the show.

Traditional rum cake calls for dried fruit to soak in rum for days or weeks leading up to Christmas. Then the fruit is added to a dough mixture and baked until done. The result is a dessert similar to American fruitcake, but with rum infusions and a less dense texture overall.

Don’t have time to soak dried fruits? Some recipes now call for adding rum directly. Just remember two things: (1) cooking the rum won’t dissolve all of its alcohol – and (2) The type of Rum you chose for your rum cake matters. 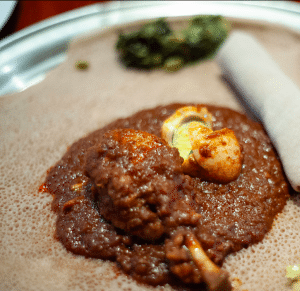 What do you eat when you break a 40 day fast on Christmas day? The answer for many Ethiopians begins at Doro Wat. But before we get to the dish, we must first appreciate the journey. The Ethiopian Orthodox Church, using the Ethiopian calendar, recognizes January 7, not December 25, as the day Jesus was born. In the 40 days leading up to January 7, Orthodox Ethiopians honor Christ through sacrifice. By fasting, only allowing one vegan meal in the afternoon or evening, Orthodox Ethiopians show restraint while the majority of the world is deep in indulgence.

But when the fast ends on January 7, it is met with a huge feast staring Doro Wat, which is chicken, cut into small pieces, and stewed in a red sauce. While regular Doro Wat uses hens, traditional Christmas Doro Wat calls for a rooster and is cut into 12 pieces, representing the 12 disciples of Jesus. The chicken pieces are then added to a rich red sauce made from simmering onions and berbere chilis for hours and served with hard-boiled eggs.

Preparing doro wat, starting early in the morning with the simmering of onions and ending in time for dinner, is more than a meal. Prince Lobo, owner and chef at Addis Nola, describes it best. “It is the embodiment of Ethiopian culture and the importance of Christmas as a sacred spiritual holiday,” he said.

Greens (The United States of America) 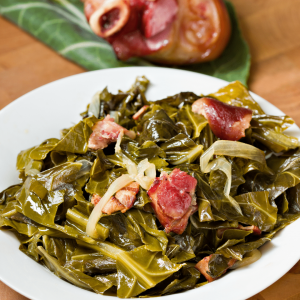 While black eyed peas are considered a New Year’s must, greens are a close second. Its bold green color symbolizes wealth in the new year, but its flavor, made possible through slow cooking for hours, is a testimony all by itself. Greens, short for a combination of collard, turnip or mustard greens, often have ratios determined by an elder and never changed. But why greens on New Year’s? Many historians now point to one area for clues: availability. Greens are in abundance in late fall, thus making them available and inexpensive to purchase in bulk. And there is only one way to cook greens: en masse. Slowing cooking, and now pressure-cooking greens, sinks them into savory green strips of goodness. Combined with black eyed peas, pork and cornbread, your New Year’s Day plate is complete. 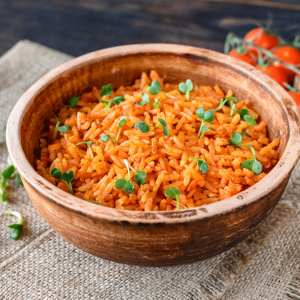 And of all the Christmas Rice variations – jollof rice of course is King. A staple in Nigerian cuisine, jollof is not only a must for Christmas but any gathering or special occasion: birthday parties, weddings, anniversaries, baptisms, etc.

While jollof rice is well known throughout all of West Africa, Nigerian jollof rice is traditionally made with long grain rice, which absorbs the rich flavors and seasonings of the pot.

Gumbo (The United States of America) 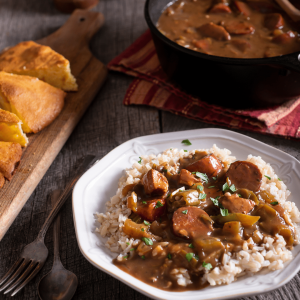 What jollof rice is for West Africa, gumbo is for Black Creole culture in America. No food is more synonymous with Black Creole cuisine than gumbo. Over the centuries many families have developed unique variations of the recipe. Using the holy trinity of Creole flavors: onions, bell pepper and celery for the base, gumbo is made by carefully crafting your roux of flour and water before adding your main ingredients. This is where the variations come into play. Shrimp, chicken, crab legs, andouille sausage and okra can all be found in classic gumbo. The magic is in the roux – make it correctly and almost any additions will be brought to their highest culinary potential in your mouth.

There is no doubt this year will look very different for a lot of people, but we hope the food remains the same. And we hope this year reminds us of the important role food plays in our culture. It tells our collective stories, through slavery, colonialism, emancipation and independence. This holiday season is also a reminder that it is our collective responsibility to ensure our recipes and all the culinary prowess they demand continue to exist beyond our generation. Zoom your family this holiday and study their methods, take notes and make sure you are ready to pick up the mantle or spoon.

There are no upcoming events at this time.