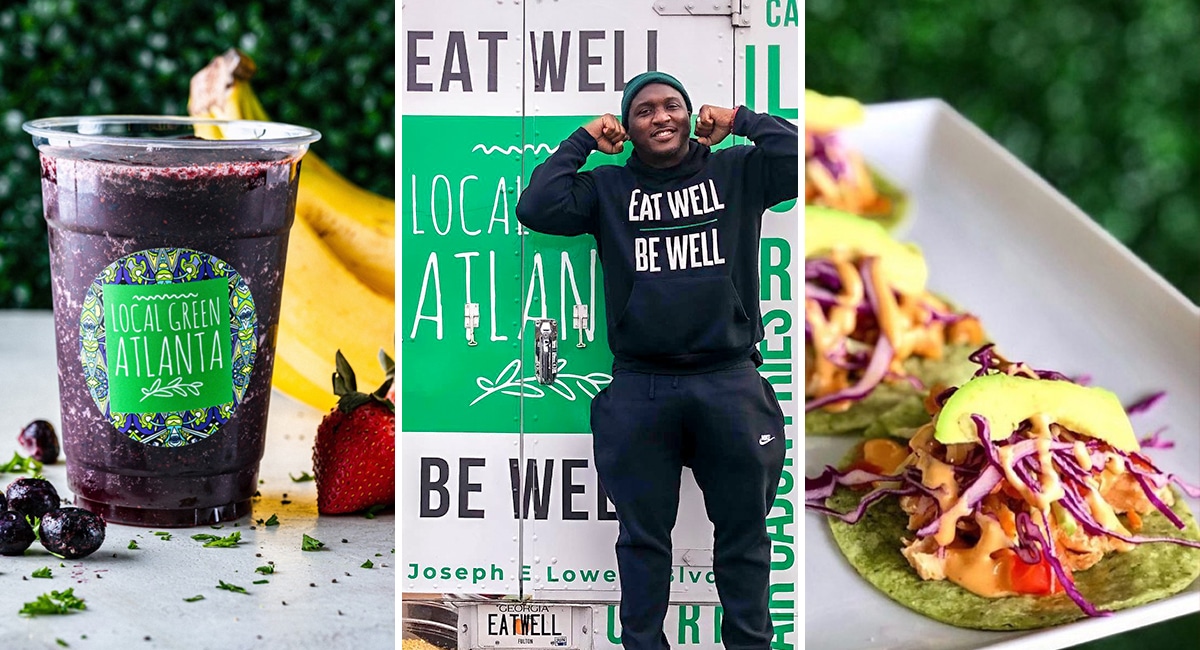 Zak Wallace didn’t grow up in a food desert, per say. How could it have been, when the streets of his Atlanta neighborhood were lined with burger joints, chicken chains, and soul food spots? When grocery stores were packed to the brim with boxes of this and bags of that? When you could always grab some chips or cheese crackers from a nearby gas station?

No, there was never a lack of food. Especially not in Wallace’s neck of East Atlanta, where parts of the Black community were thriving in so many other ways.  But when it came to sustenance, there was an overrepresentation of the same kinds of foods: highly processed snacks and meals that were heavy on the meat, salt, sugar, and additives.

“I never saw a smoothie place,” he said, looking back on the nutritional landscape that he grew up in. “I never saw anything that was promoting fresh, healthy, and energetic.”

Though “food desert” has become a popular term over the past few years, it would be reductive to apply that label to the foodscape Wallace grew up in. And “food swamp” doesn’t work either, as researchers have pointed out that swamps still have a certain level of biodiversity and ecological balance – which meets the nutritional needs of the living things they host – that these environments don’t. In fact, across America, these kinds of foodscapes transcend comparisons to the natural world, as such grossly imbalanced and non-nurturing environments do not exist in nature.

Instead, these artificial constructs are “the result of systemic racism and oppression in the form of zoning codes, lending practices, and other discriminatory policies rooted in white supremacy,” Nina Seville of Healthy People & Thriving Communities writes. “Using the term desert [or swamp] implies that the lack of healthy and affordable food is somehow naturally occurring and obscures that it is a direct result of racially discriminatory policies and systematic disinvestment in these communities.”

That’s why people in academia have started to call the phenomenon “food apartheid” or “food oppression.” For Wallace, creating Local Green – which aims to provide affordable, attractive, delicious, fresh food alternatives to the foodscape he grew up in – was a chance to break himself, and his whole community, free. 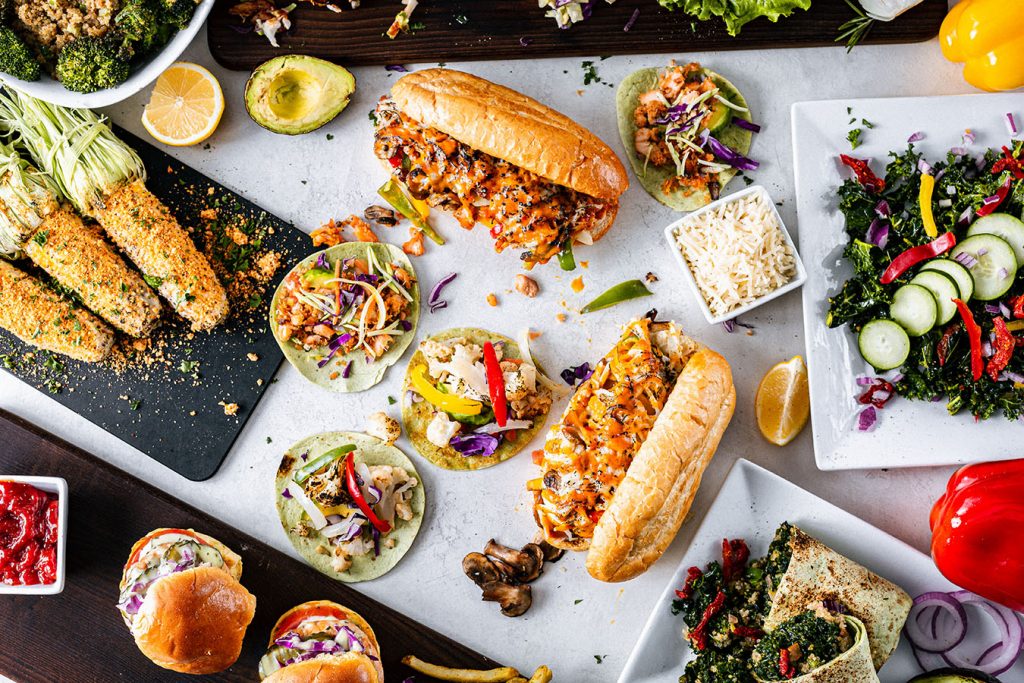 “It was a lifelong process,” Wallace said about un-learning the food habits that he developed as a child. But the light bulb flickered on one day while he was out getting brunch in San Francisco. The reviews of this particular restaurant were excellent, he says, so he wasn’t surprised by the line that wrapped down the block. It was the nature of that line that struck him instead.

Inside, he got even more insight as he took note of the plates on people’s tables. “I just see colors,” he says. “Cantaloupe and honeydew melon and fresh pressed juices; egg whites.”

That made him curious, so he started Googling the foods he was seeing and learning how food in general connected to the health conditions that were rampant in his community, like hypertension, diabetes, cancer, and more. He then realized that he had never learned about food from this angle – only in terms of what would taste best or be most filling.

“As a kid I never remember hearing a conversation about nutrition. In the beauty shops, in the barber shops, I heard everything else you can name,” he says. “But I didn’t hear a conversation about nutrition? Never? Not once? And that resonated with me…I know there are some [Black] people who had different experiences and grew up in a different way, but I’m talking about as a whole. The culture that we celebrate is all around bad eating.”

And he knew that culture from every angle. Wallace went from watching Black culture flourish in Atlanta to being part of its national and international proliferation. He was a successful songwriter at the forefront of the city’s musical transition from 90’s hip-hop and R&B to early-to-mid 2000’s crunk-and-b and the early trap era, writing for artists like Ciara, Lloyd, Keri Hilson, Nelly, and Young Jeezy. Being in those circles gave him a carte blanche lifestyle, where there was always an excess of food and alcohol available. Looking back, he recognizes what role the music industry played in supporting a culture of inefficient eating.

“4 a.m. at the Waffle House,” he says, quoting the infamous Jay-Z lyric before breaking down its impact. “So we’re talking about eating processed foods at 4 a.m. in one of the biggest songs. [And that late night diner culture was] like a big thing, right? And that’s not healthy for us. That’s literally a habit that can end your life early.”

When he set out to create Local Green, it was with the goal of helping people transform their diets and our collective culture around food.

Fruits of their labor 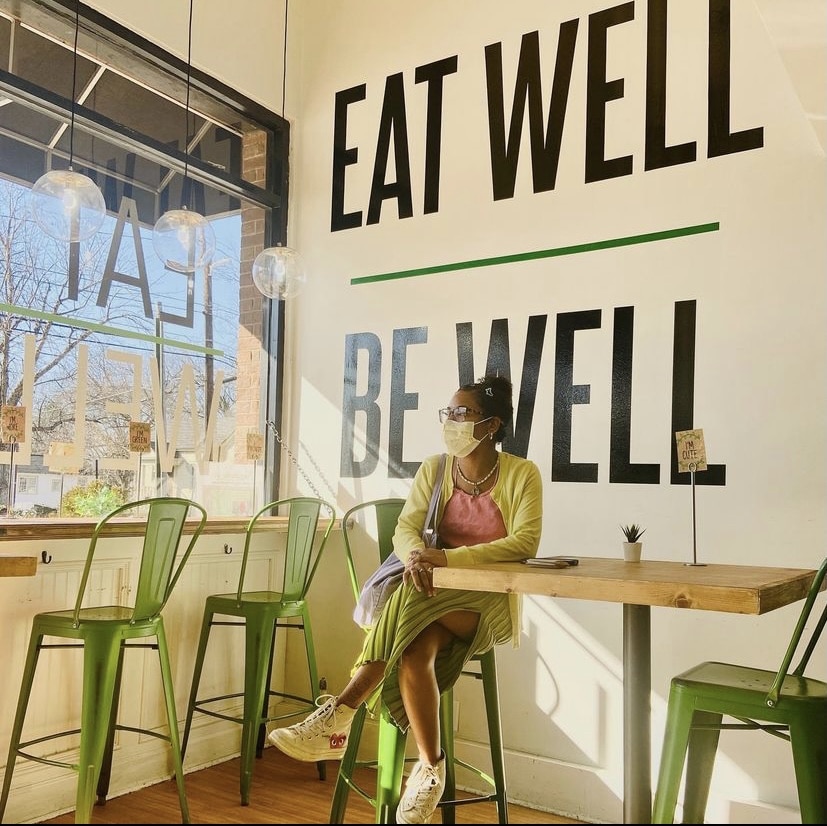 It started with Wallace and his wife, Robyn, experimenting with different types of ingredients than they were used to. Healthier ingredients, like avocado and egg whites. They played with texture and flavor, considering things like fiber and protein levels, and took the time to investigate the healthiest bread on the market. He soon realized that they were “eating in a really conscious, elevated way” and that they were transforming their bodies in the process.

Wallace started getting attention for their creations after sharing them on Instagram, which prompted him to put a menu together and begin selling lunches out of a make-shift to-go counter that they set up in his mama’s kitchen. After they began selling out, daily, and getting more shine on social media, someone from a local community health center approached him about making it their base of operations – rent free – in exchange for teaching community classes on health and nutrition.

Those grassroots moves gave Local Green the legs it needed to stand on, creating the foundation for them to grow from the community center, to a food truck, and finally to a brick-and-mortar location, adding smoothies, salads, wraps and healthier burgers to the foodscape of the neighborhood he grew up in.

“It’s all about seeing people coming from the gym, going to the spot, coming out with a green and white bag and a smoothie. It’s about seeing peaceful people. Pleasant people. Just that presence is everything,” Wallace says. “And that’s the thing I’m most proud of because I knew we were out there, I knew we existed, I knew it wasn’t just a thing that was a problem for me. I feel like I shared a gift that God gave me with whoever wants to participate.”

And that’s the thing I’m most proud of because I knew we were out there, I knew we existed, I knew it wasn’t just a thing that was a problem for me. I feel like I shared a gift that God gave me with whoever wants to participate.”

A call from the Kingdom 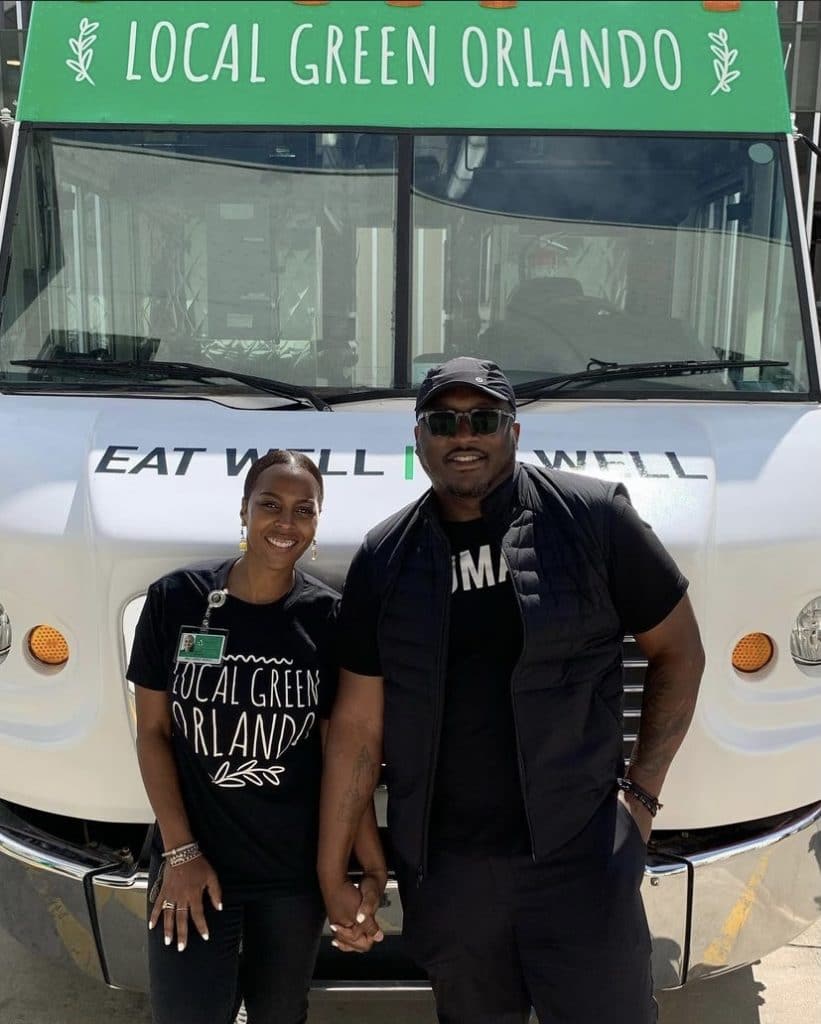 Wallace and the team behind Local Green have since gotten the opportunity to diversify foodscapes in other communities through a new partnership with Disney. The call from the Magic Kingdom came shortly after being featured on the news for feeding the community during the pandemic. But it was a call they almost didn’t answer.

“When they called, I honestly thought it was some time share type of thing,” he said.

But his assistant encouraged him to look into it and take the invitation seriously. Just a few minutes into the meeting, Wallace realized it might just be the opportunity of a lifetime: They were being invited to bring the Local Green food truck to one of the Disney properties in Orlando.

Being onboarded by Disney was an arduous process that required team Local Green to step up their business and administrative game. They were vetted for a whole year, with a string of presentations and in-person tastings with the executive board.

“My wife, Robyn, really shined with this. Helping me with the administrative piece and the burdens and challenges of meeting all the deadlines with everyone,” he said, his voice full of admiration. “She did an amazing job with that.” The Local Green truck made its debut in Disney Springs in mid-March 2022.

They plan on bringing their same fresh foods to Orlando that have garnered fans across Atlanta, like The Rapper’s Delight, a Philly-style sandwich with fresh grilled salmon, topped with grilled peppers, mushrooms, and onions, followed by a drizzle of their melted vegan mozzarella and their special tangy “Liquid Gold” sauce, all served on a toasted brioche roll. They’ll also be bringing the community-centric ethos that has gotten them this far.

“It’s about tapping into the culture, being into the community, and being really dead set on making a difference and impacting members of that community,” he says. “Community became the key ingredient.”