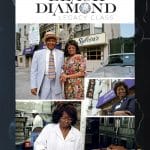 The history is in the walls

Sylvia’s Restaurant is a historical archive disguised as a soul food spot. According to founder Sylvia Woods’ granddaughter, Tren’ness Woods-Black, “the history is in the walls.” Dignitaries like former President Barack Obama, musicians like Beyonce and Jay-Z, and civil rights activists like Rev. Al Sharpton have all fellowshipped and dined at the 58-year-old restaurant. If those walls could talk, it would be a historian’s dream to hear just a whisper.

“Sylvia’s Restaurant was born during the same time that the word ‘soul’ was becoming a mainstream term,” Woods-Black says. But for them, “soul” wasn’t just a stylish buzzword that helped attract high-profile clientele. At Sylvia’s, “soul” was the essence of community and togetherness. 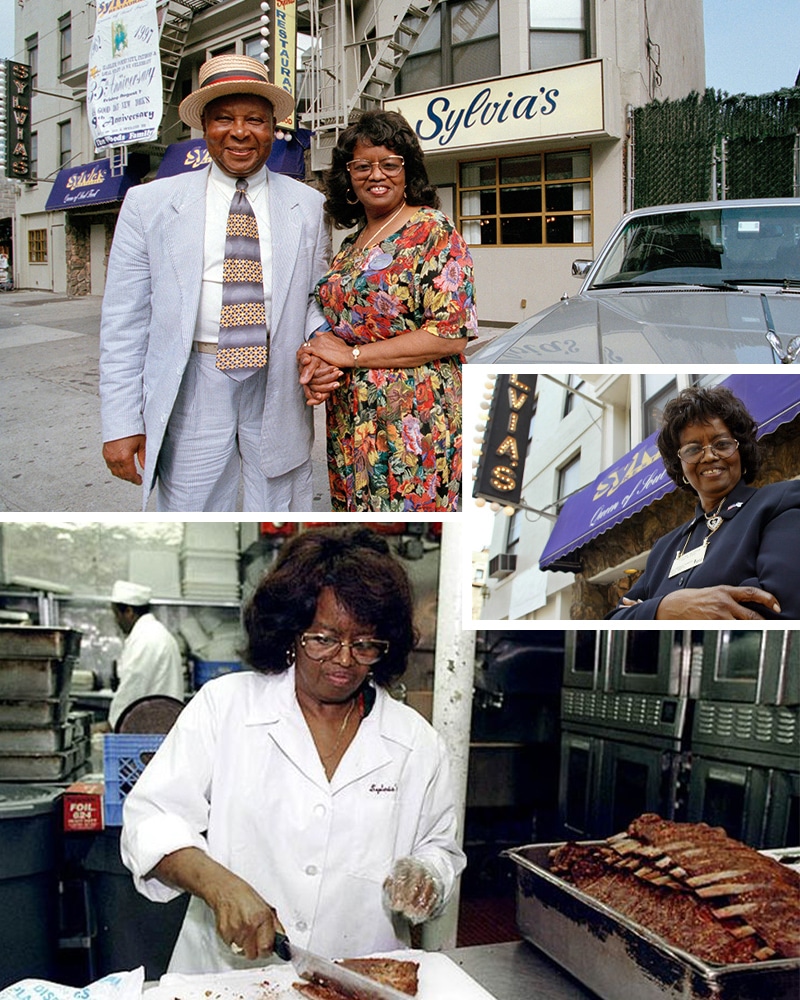 The ‘soul’ of Sylvia’s started to come together in 1944, during the Great Migration, when Sylvia Woods moved from her hometown of Hemingway, South Carolina to Harlem, USA with her husband Herbert Deward Woods. The childhood sweethearts settled in a tenement on 131st Street in a land where Black people were able to create freely and hold positions of pride. One day as Woods walked down 126th Street and Lenox Avenue, she noticed Johnson’s Luncheonette’s help wanted sign. She stepped inside to inquire about the notice and despite having no restaurant business experience, Woods persuaded the owner, Andrew Johnson, to hire her as a waitress due to her unmatched work ethic. Woods left behind a dreaded factory job in Queens and became a familiar face in the neighborhood.

Home to 35 seats, the eatery boasted a family-like atmosphere. Johnson, also a South Carolina native, took notice of Woods’ determination. Given his real estate investments, he decided to sell the luncheonette to Woods whose entrepreneurial spirit kept the restaurant’s presence alive. Woods asked her mother, who owned a farm in her hometown, to take out a second mortgage on the land to purchase the business.

Her mother agreed and within a year of operation since opening on August 1, 1962, Woods repaid her plus interest. The importance of land and ownership, a belief that Woods learned from the matriarchs in her family, inspired her to purchase real estate surrounding the restaurant, which now adorned her first name in the form of proprietorship.

“It’s one of those things we’re proud about because we’re able to control the narrative on that avenue. We’re able to say that when you walk onto 126th and Lenox or 127th coming from uptown, you know this is for the culture and it’s always going to be that way,” Woods-Black, the VP of Communications and Strategic Partnerships, says. “That’s our succession plan. We have a no sale clause in our family for our real estate so we’ll always own. That block will always be Black-owned. Harlem doesn’t have to worry about us selling the property. That’s something for Harlem. It’s not just for us.”

A Restaurant and a Resource

Woods-Black, who’s 3rd generation and the fourth grandchild out of 18, shared that her grandmother always opened Sylvia’s doors to anyone looking for a hearty meal. During the 80s, when the crack epidemic pillaged New York’s disadvantaged communities, Woods-Black said her grandmother would rise early every morning to feed those fighting drug addiction and help them get back on their feet. As described by Woods-Black’s grandfather, soul food is “from the soil.”

Through farming techniques to dishes that include yams, black-eyed peas, collard greens, and proteins, Woods-Black says the legacy of soul food traveled from the ancestors and their food practices in Africa down to her beloved grandparents’ interpretations. More than a restaurant that feeds guests—the word customer wasn’t in Woods’ vocabulary—Sylvia’s evolved into a household item. “Sweet Cookin’, Dippin’ & Moppin’ Sauce,” fish fry mixes and seasonings from lemon pepper to a secret rub all can be found at your local supermarket. 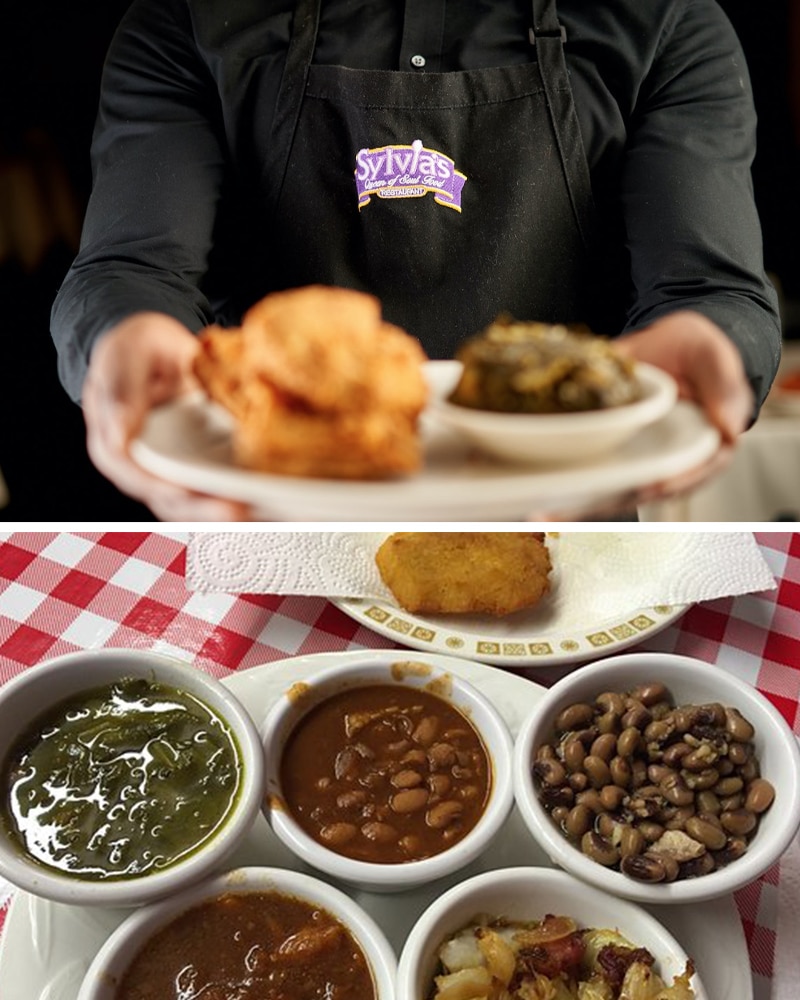 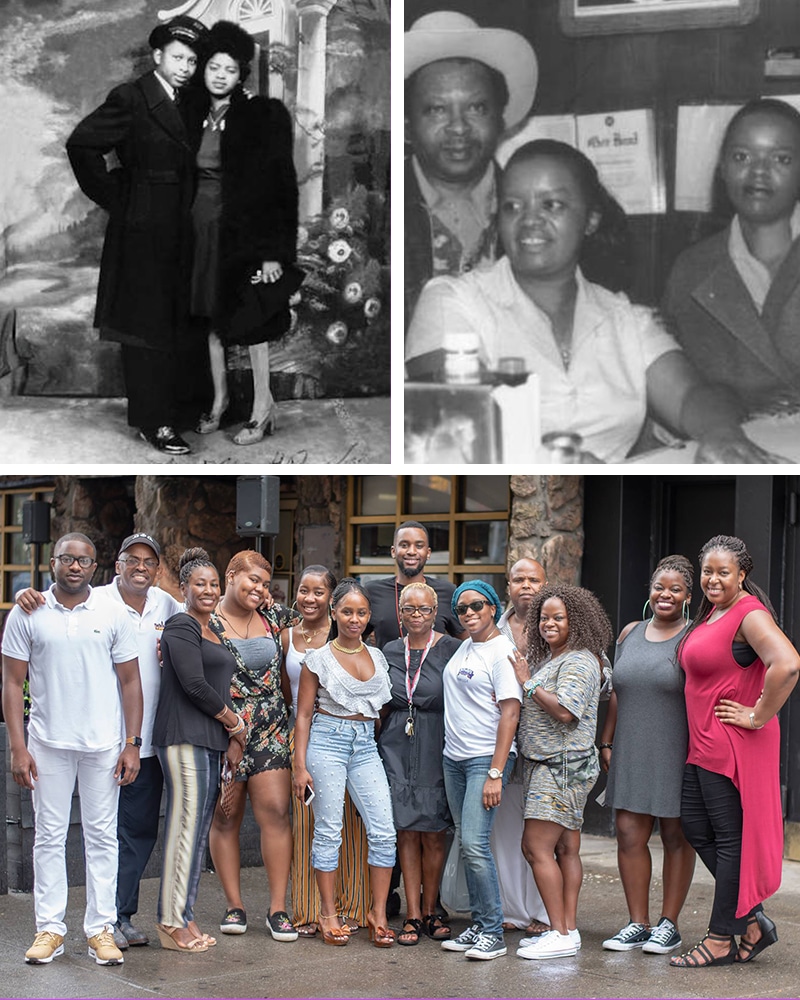 During the height of COVID-19 in 2020, the restaurant partnered with Rev. Al Sharpton’s National Action Network to feed thousands of people. A scholarship foundation established in 2001 also assists college-bound students and a mentorship program that encourages the recipients to mentor other youth like them. In the face of adversity, Sylvia’s continues to keep the marquee lit for Harlem. “It represents hope, resiliency, our culture, where we’ve come from, how we got over and that marquee lit means we’re going to be alright,” Woods-Black says.

With a nickname like the “Queen of Soul Food,“ Woods embodied more than a few dishes. Since her passing in 2012 at 86 years old, she’s still described as the physical vessel for what was once known as a village but now is synonymous with a breeding ground for Black entrepreneurs. “I am Harlem, they just call me Sylvia.”Black, the VP of Communications and Strategic Partnerships, says. “That’s our succession plan. We have a no sale clause in our family for our real estate so we’ll always own. That block will always be Black-owned. Harlem doesn’t have to worry about us selling the property. That’s something for Harlem. It’s not just for us.”