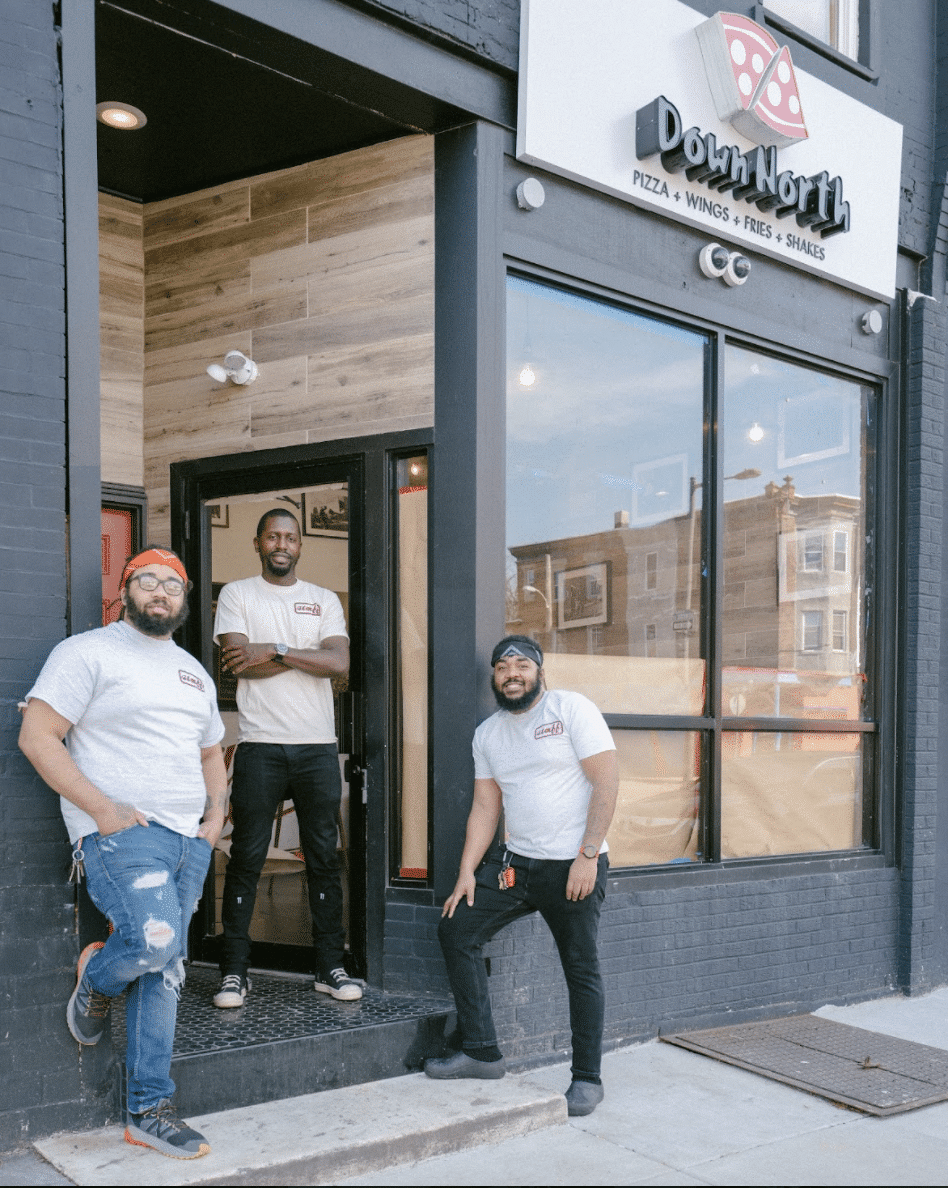 Michael Carter doesn’t attend the rallies or protests that pop-up around Philadelphia. As a formerly incarcerated person, he worries that if something were to go wrong in the midst of a demonstration, he could end up back behind bars for nine months.

“The bail fund doesn’t work for me,” he jokes. The way he protests, he says, is by showing up to work every day and showing the community that people like him should not be defined by their past. “This is my way to demonstrate. Basically by proving that people with similar upbringings, we’re not our worst mistake. This isn’t the end of us,” he says.

It’s worth noting that Carter’s place of work isn’t just any old restaurant. Carter is the executive chef at Down North Pizza, located at 2804 West Lehigh Avenue in Philadelphia. Down North, which officially opened its doors in March 2021, is on a mission to bring comforting food to North Philadelphia’s Strawberry Mansion neighborhood and to break the cycle of mass incarceration by providing opportunities for formerly incarcerated people. 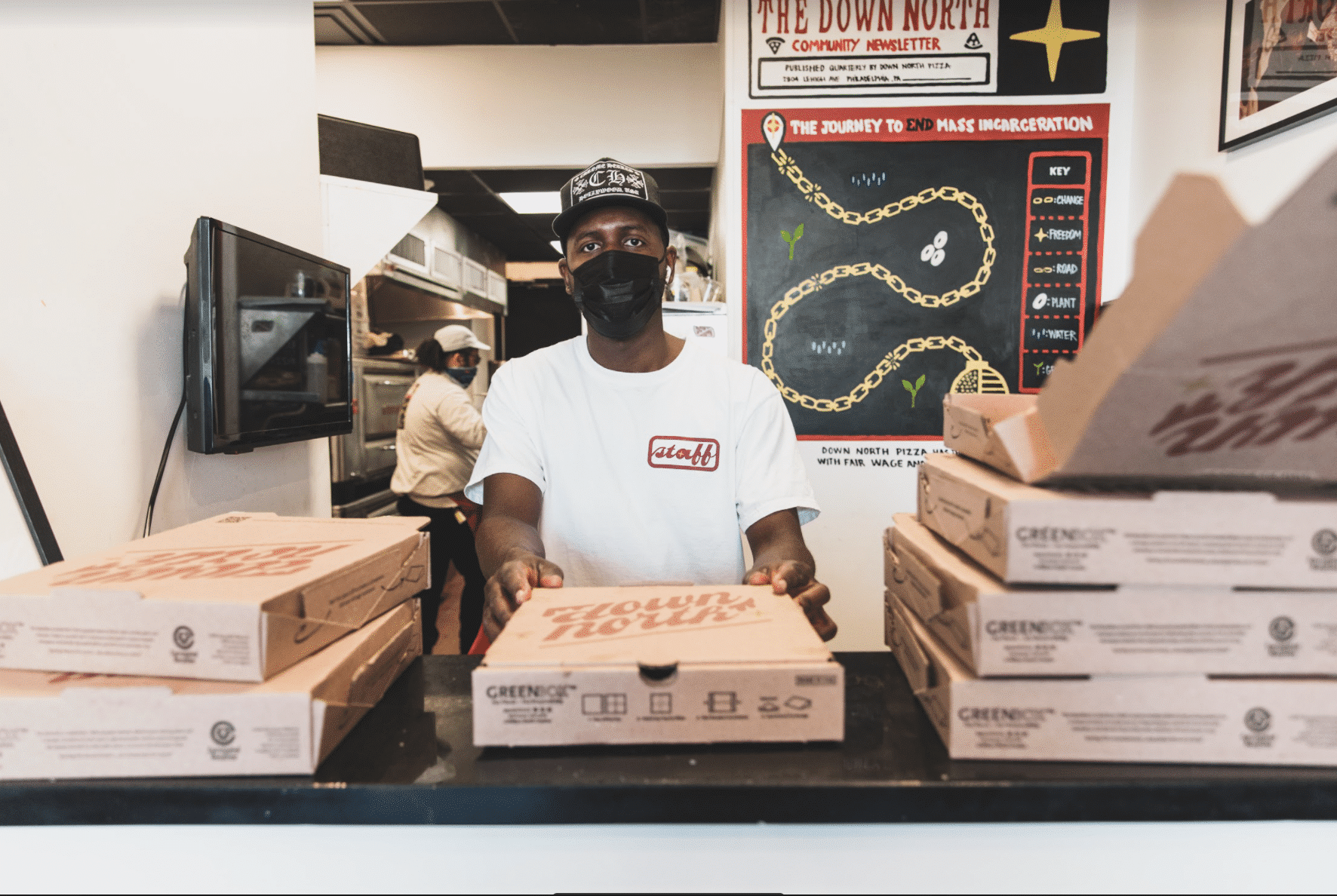 The restaurant specializes in Detroit-style pies with a wide variety of toppings, alongside chicken wings with flavorful sauce options like its Bodega sauce (a thick, sweet sauce made up of Malta Goya, tamarind juice and other bodega staples) loaded fries, hand-spun milkshakes and real lemonade – and it exclusively hires formerly incarcerated people. Down North pays a living wage of $15/hour plus pooled tips and offers access to wraparound services for staff. If an employee needs a place to stay, they can live in an apartment above the shop for free for up to six months. If they need a lawyer, Down North provides access to pro-bono legal services. By providing access to resources, the team at Down North hopes their restaurant will make a difference in the lives of the people it serves–both in front of and behind the counter. 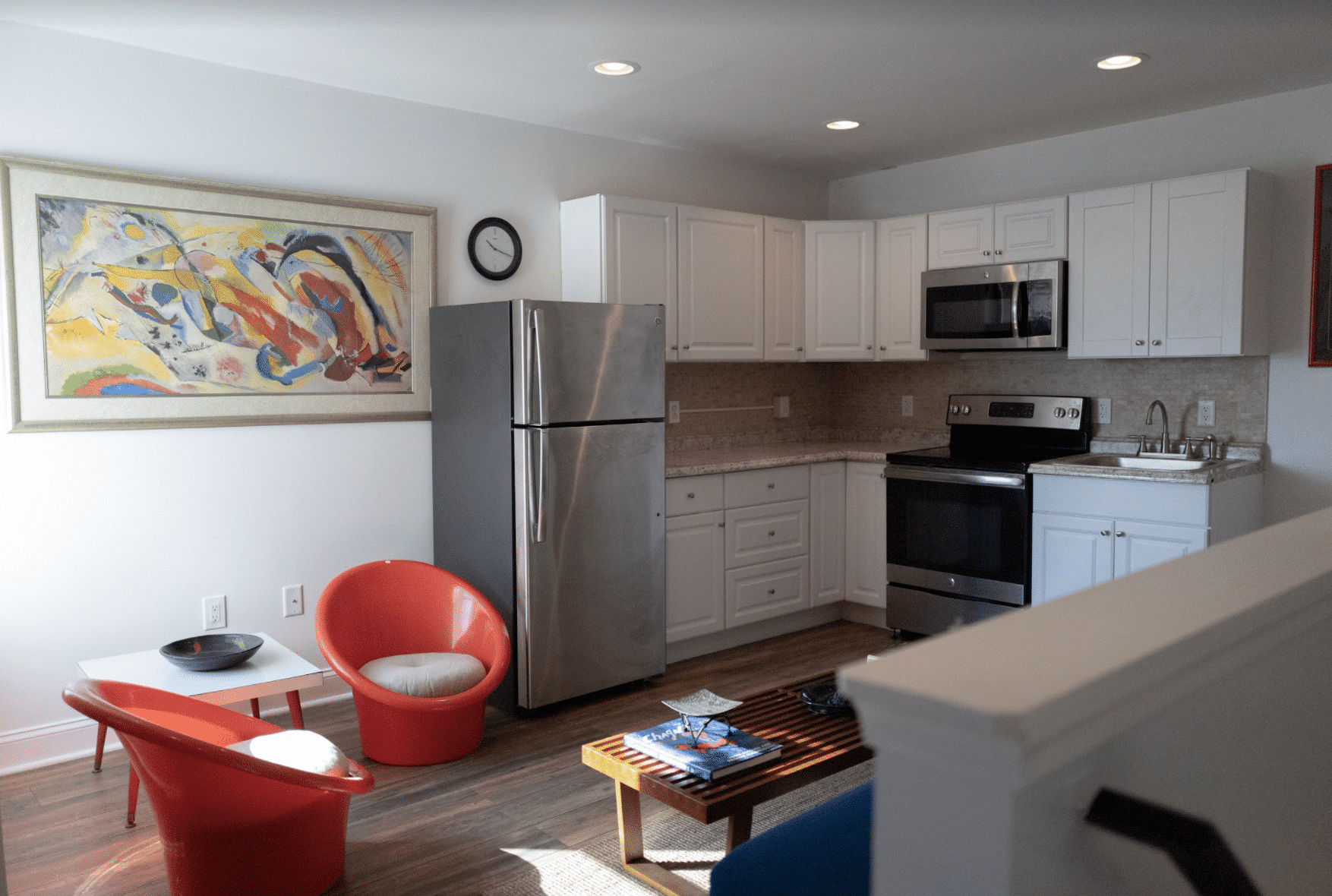 “[Mass incarceration] is one of the issues that plague our community so we wanted to find a way that we could combat that in our neck of the woods,” says Muhammad Abdul-Hadi, the shop’s founder and CEO. “Our thing is, everybody deserves a second chance.”

Formerly incarcerated people face steep barriers to fully reentering society, especially when it comes to employment. A 2021 report by the Council of State Governments Justice Center and the National Reentry Resource Center found that 72% of all collateral consequences impact employment access. The formerly incarcerated lose out on about $55.2 billion per year in earnings; losses that contribute to the neverending cycles of poverty and imprisonment in communities across the U.S., according to a 2020 report by the Brennan Center for Justice.

Since 2016, Philadelphia has banned city employers from asking about criminal records during hiring or running criminal history checks on potential employees before offering them a job. The city also limits how that criminal history can be ultimately considered. Employers that hire formerly incarcerated people may also qualify for the federal work opportunity tax credit of 25%-40% of an employee’s first year wages.

“At Down North, We’re Listening” 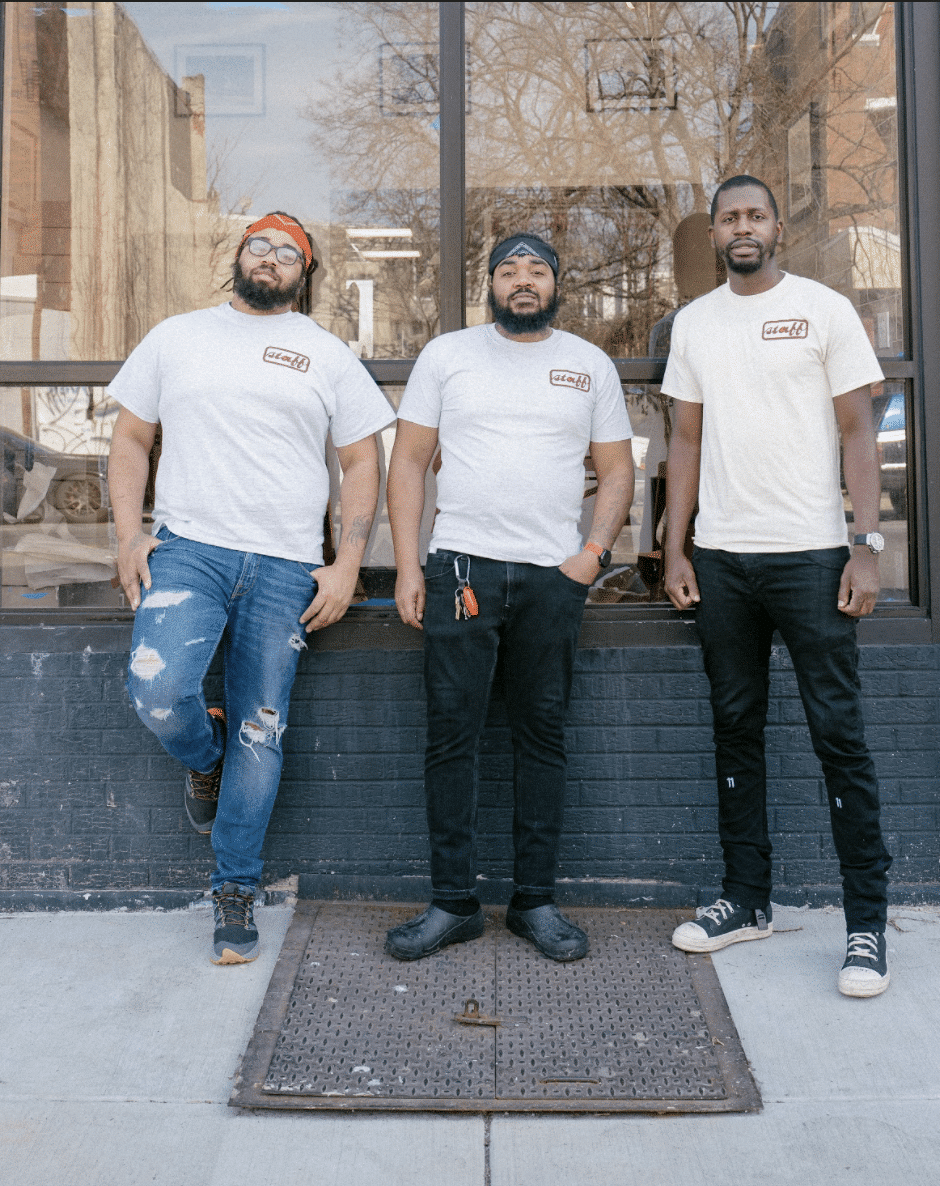 Kurt Evans, the restaurant’s co-founder, is an experienced chef who has dedicated his career to finding ways to help the formerly incarcerated. Outside of Down North, he also hosts the End Mass Incarceration dinner series which he uses to spark discussions around the adverse impacts of the criminal justice system. “The community is telling you what the community needs. You just have to listen. At Down North we’re listening,” Evans says. “We’re a small location and our footprint is very small in this lane that we’re in but hopefully the effect of what we’re doing will have other businesses modeling after what we do.”

Carter says his background and the restaurant’s mission helps to provide a stress-free environment for the staff.–t They’re able to be themselves and have a sense of camaraderie they could not have if they had to hide parts of their past or interact with people who can’t relate.

“When we’re there it’s like we’re all walking the track together,” he says, referring to how walkies, or friends, walk and connect during their outside time at a penitentiary. “I feel like that’s a stress-free environment for my guys–I’m not going to be on top of them, of course I’m going to be on top of them to make good pizzas, but other than that, you don’t gotta worry about me threatening to lock you up or anything like that.”

Tales of a Hustler 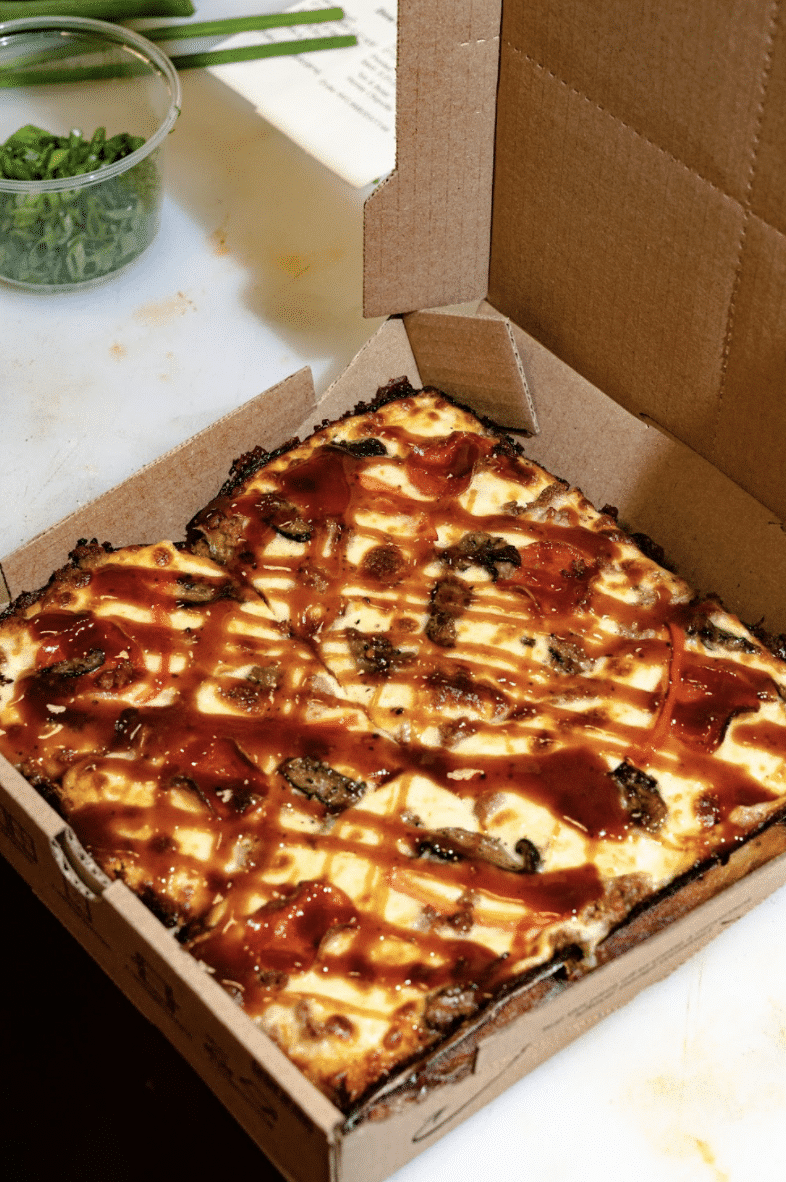 While the mission and workplace culture are commendable, the food is what keeps the lights on at Down North. The team takes pride in their unique flavor combinations and willingness to experiment. During his conversation with Black Restaurant Week, Carter had just finished running a special pizza called “Tales of a Hustler ” (all of the pies are named after Philadelphia hip-hop songs) that featured smoked brisket, harissa beer cheese, Haitain pickling and a sprinkle of thyme. His favorite? The Flip Side, which is made up of bbq beef bacon, caramelized pineapples, a bbq sauce drizzle and pickled jalapenos.

“Just because I’m on 28th and Lehigh doesn’t mean I’m not a chef,” Carter says. “I like to experiment with these ingredients so when you go to another restaurant– and this might be your first time there–but you’re like damn I had that on a pizza at Down North. I actually know what that is and what it tastes like.”