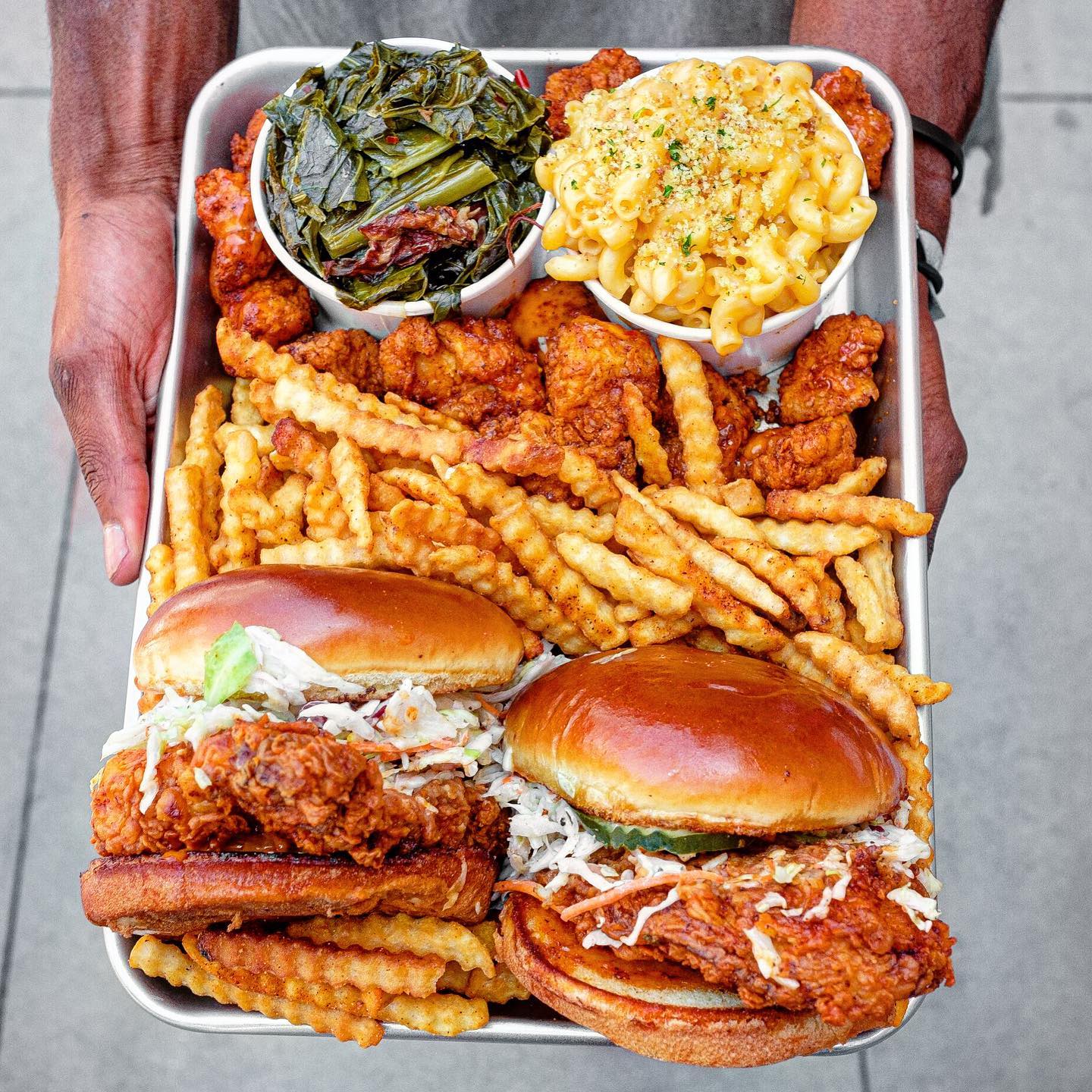 Posted at 08:57h in Follow Your Fork by Jada Smith 0 Comments
0 Likes

For nearly one hundred years, the Prince family of Prince’s Hot Chicken has held claim to one of the best culinary stories in American history.

It starts with Thorton Prince II, who was known around town for having a good time with his family and friends. Unfortunately, the late nights didn’t always sit well with his girlfriend. One night, after an exceptionally late outing, Mr. Prince returned home with what appeared to be evidence of another woman. Rather than start a long fight, his girlfriend went in the kitchen and started cooking.

Ms. Andre Prince-Jeffries, the great-niece of Thorton Prince II, recalls the story with intrigue. “She went and got all the hot spices she could,” she says. “And served up what she thought was revenge on the plate.”

But her plot didn’t go as planned. Thornton woke up to the savory smell of fried chicken and fell in love with the flavor after just one bite of the flaming fowl. “It’s amazing to think this all started with a woman trying to get even with her man,” recounts Prince-Jeffries.

The Birth of a Movement

After asking for seconds and thirds, Thornton knew he wanted to bring his new love of “Hot Chicken” to the masses. Today, Prince’s is still proudly family-owned and operated. Ms. Andre Prince-Jeffries has spent the last 40 years’ running the business and staying true to its very hot origins.

“For a long time, we were out here selling Hot Chicken by ourselves. But in the last fifteen to twenty years, it has drawn global interest. People are coming from all over the world. It is amazing how the word has gotten around,” says Prince-Jeffries.

The word has indeed spread. Now you can find Hot Chicken restaurants across America. And while all this newfound attention is great, it is important to pay homage to the Black family that created this unique food genre.

“I desire to keep the restaurant in the family and to keep it going so that I have something to pass on to the next generation,” Prince-Jeffries reflected when asked about her hopes for the future of Prince’s.

It appears Prince-Jeffries will get her wish because the future of Hot Chicken is looking brighter than ever.

Below is a list of Black-owned restaurants proudly serving up their versions of the Nashville staple. 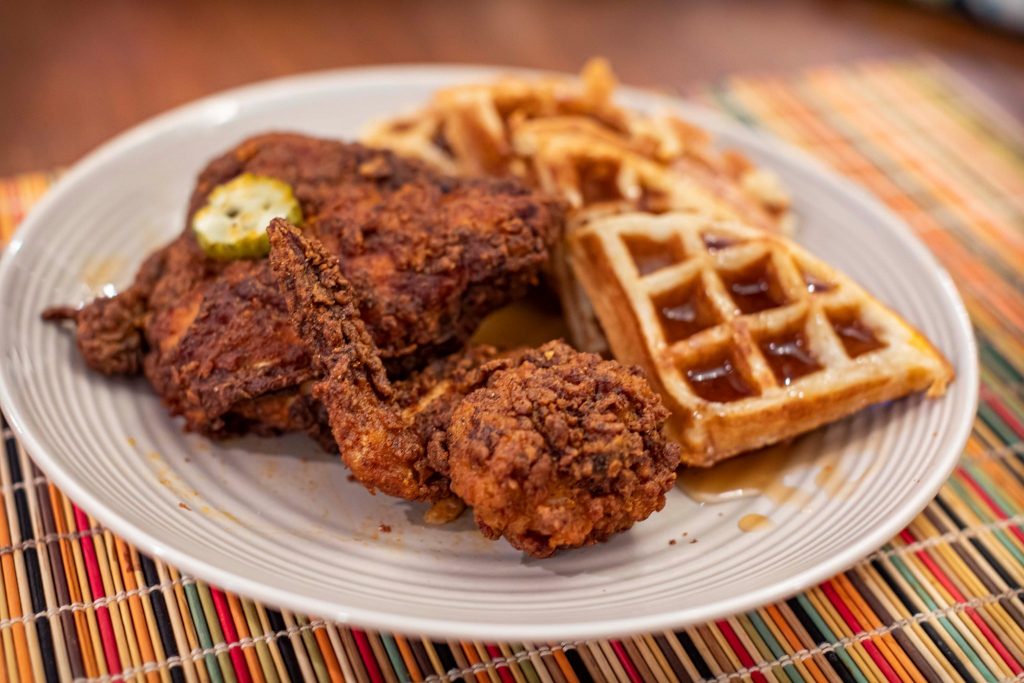 Eugene’s Hot Chicken is bringing hot chicken to the Alabama masses. Now operating two brick-and-mortar locations in Birmingham and Hoover, Eugene’s also maintains its food truck in Birmingham. At Eugene’s, variety is the spice of life. They offer an expansive menu filled with traditional hot chicken items like the chicken sandwich and tenders, but also festive food pairings such as chicken & waffles and chicken & catfish, and soul food side offerings of collard greens, mac & cheese and more! 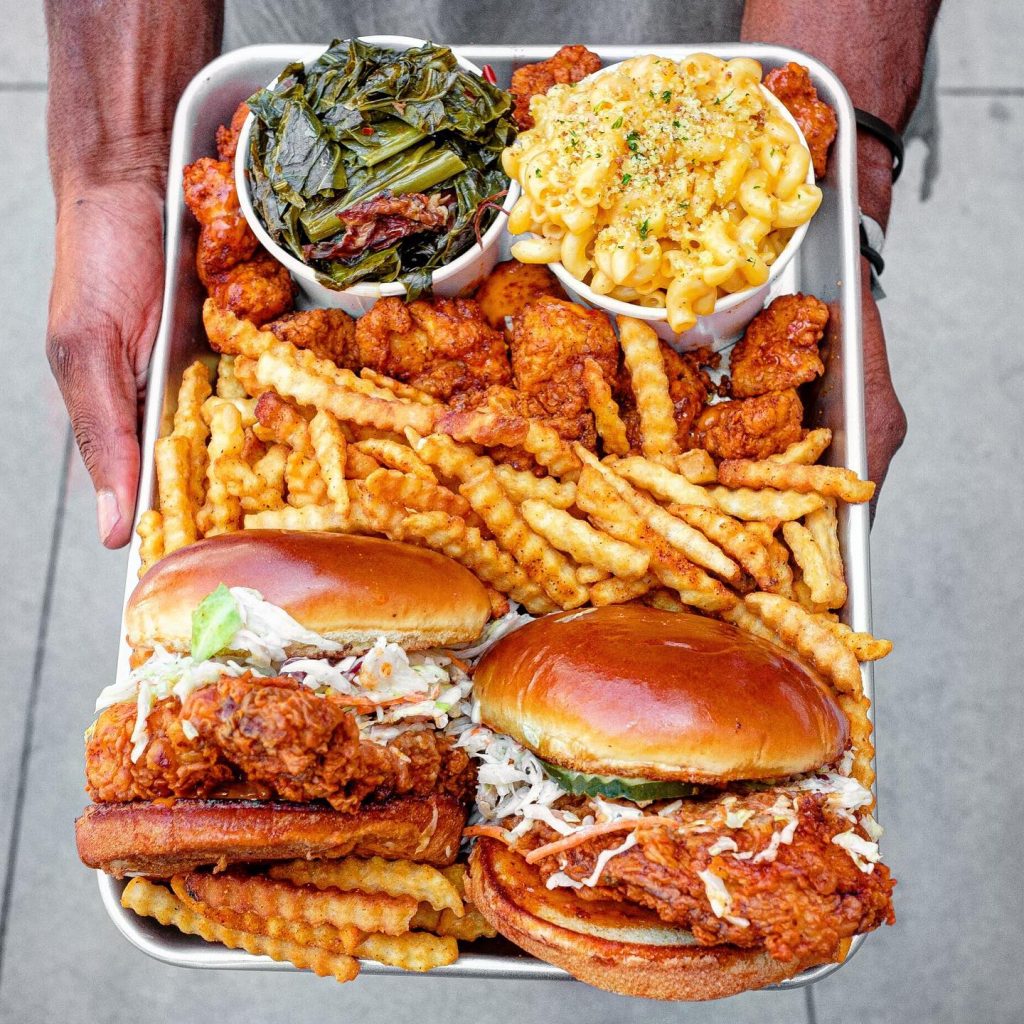 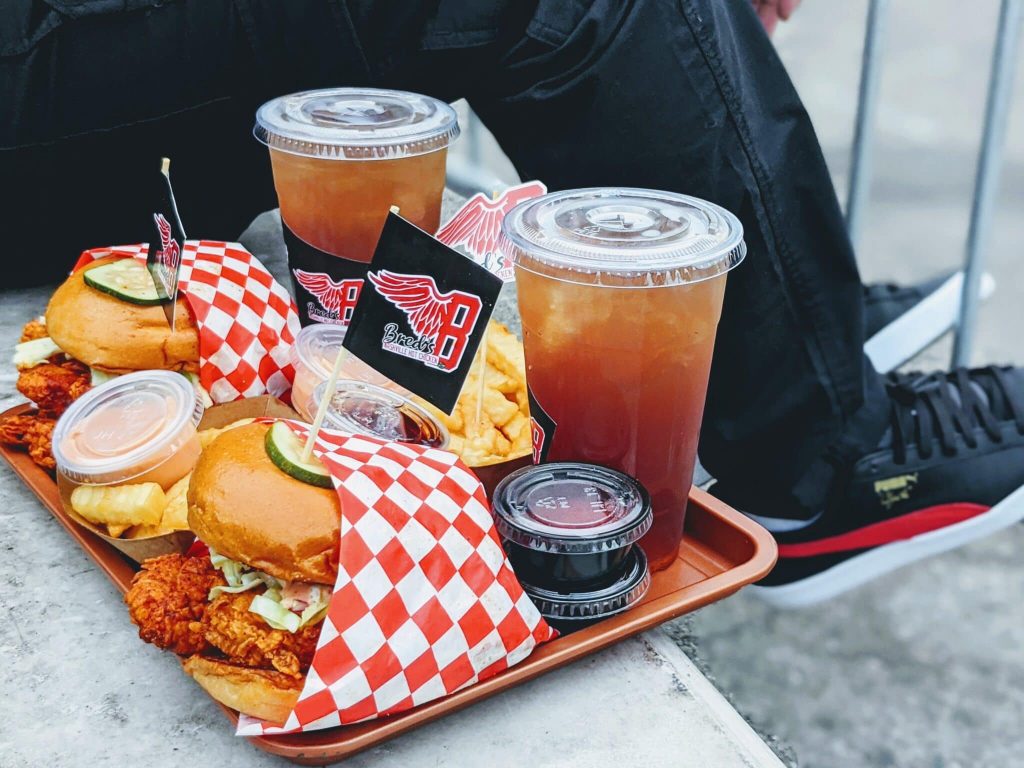 Bred’s Nashville Hot Chicken started in 2017 as a way for Scott and Laura Kearse to escape their 9-5’s and dive into their passions for food, fried chicken and spices. The result was a laser focus on Nashville Hot Chicken. Wanting to keep things simple, Bred’s remained a pop-up shop until landing a food truck in January 2020. Now the food truck operates seven days a week from 11 – 9 p.m. The best way to know where the food truck will be each day is to visit their Instagram. 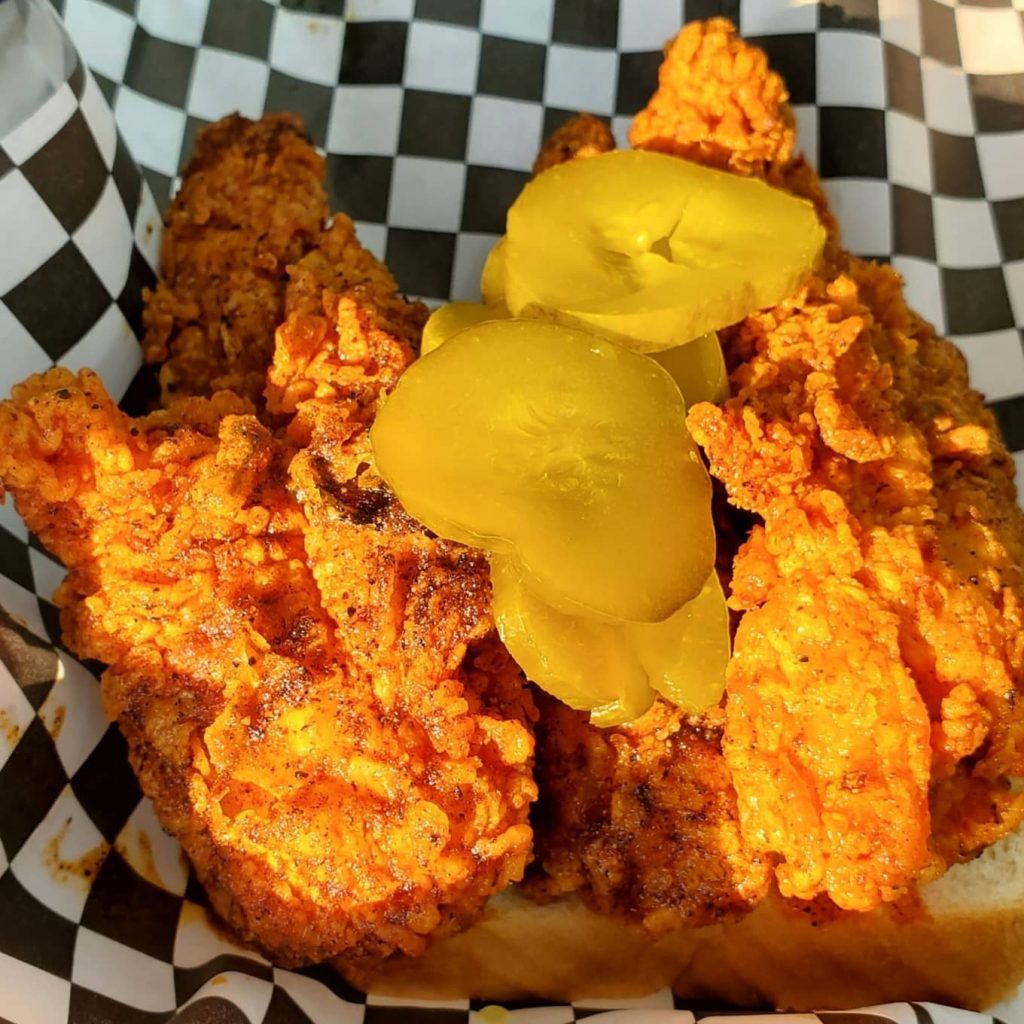 Rosalyn’s Hot Chicken was born in the kitchen of Jacques and Kushana Collier’s home in August 2016. The goal was to bring their love of Nashville Hot Chicken to Houston’s food scene. Demand quickly grew and what started in their kitchen expanded to pop-ups, and eventually a food truck, which they operate at various locations around Houston. Rosalyn’s keeps it simple but delicious, offering wings, tenders, a chicken sandwich, hot potato mash and fries; all made to order with your preference of heat! 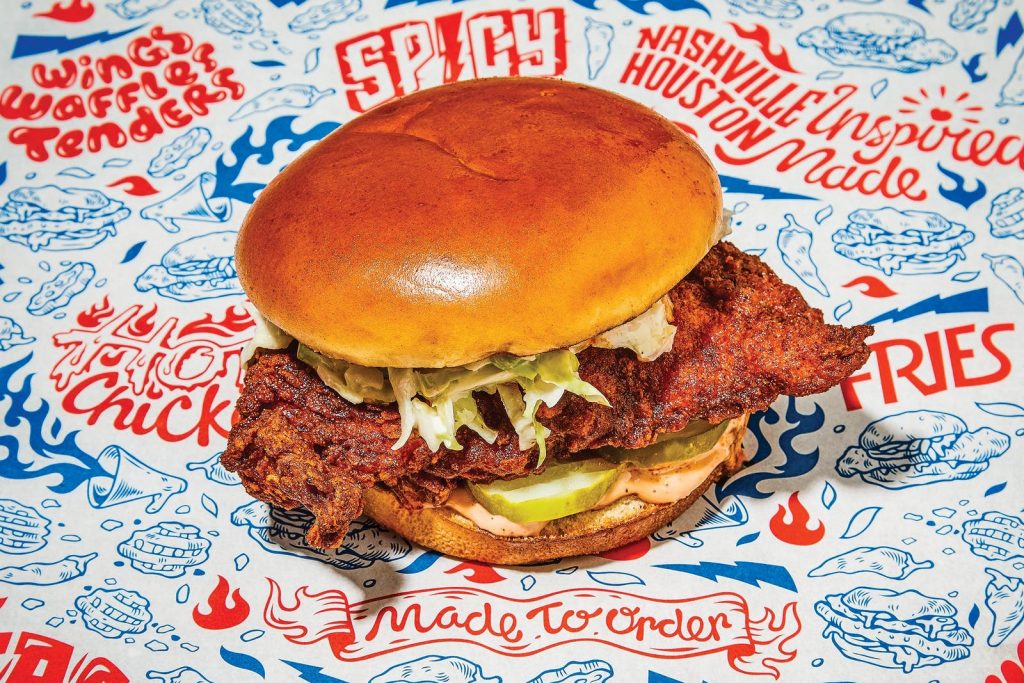 Mico’s Hot Kitchen has quickly become a Houston favorite for the Nashville staple. What started as a food trailer in 2019 became a brick-and-mortar restaurant by 2020. Mico’s open outdoor seating and efficient serving dynamics have allowed the restaurant to continue safely serving Houstonians throughout the pandemic. Guests can expect a simple menu with explosive flavors, Halal certified options and a dedication to serving Hot Chicken that honors its Nashville roots.

RELATED: Where to Eat & What to Do on the Outskirts of Houston