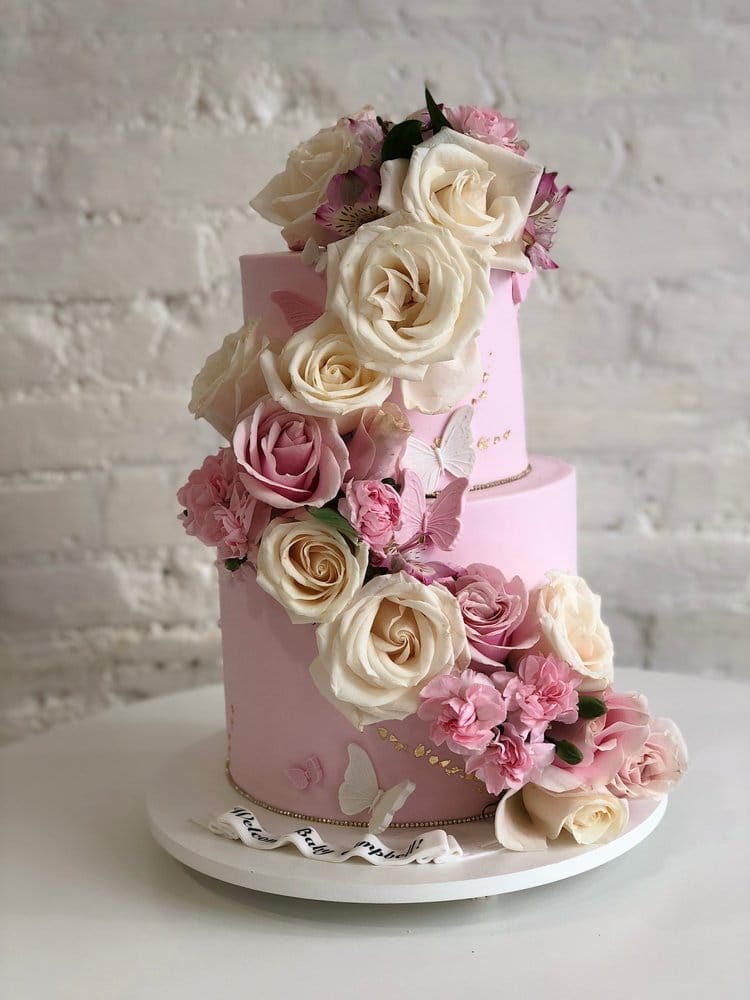 Posted at 12:41h in Follow Your Fork by Jada Smith 7 Comments
3 Likes

In the mood for something sweet? Get your sugar fix with some of the delectable treats from one of these Black women-owned bakeries, many of which offer nation-wide shipping as well as vegan and gluten-free options.

But it’s not just the pies, cakes and donuts that make these businesses so sweet. Beneath the batter are resilient, enterprising women whose stories can inspire others to turn life’s lemons into lemon meringue. Considering that Black women pastry chefs often struggle for the same visibility as their white counterparts, their stories are not only inspiring, they’re essential for the other Black women bakers looking to walk similar paths.

Get to know the five Black women-owned bakeries below and leave a comment shouting out any of your other faves!

A post shared by Not Jus’ Donuts Bakery (@notjusdonutsbakery)

It’s true that Not Jus Donuts is about far more than donuts. For Myrtle Jackson, it’s about the history, culture and matrilineal legacy that has held her family down for generations. Some of the recipes Jackson uses to create her pies, cobblers and cakes are more than 180 years old, passed down by her great grandmother Delia, who grew up in Cameroon but wound-up cooking on a Texas plantation after being forced into slavery. Now the founder and CEO of a bakery on the aptly named Emancipation Avenue, Jackson is preserving and building on her family’s rich culinary legacy, offering a range of desserts from banana pudding to peach cobbler, pies, cookies, cupcakes, alcohol-infused chocolate strawberries and decadent wedding cakes. Try Ms. Delia’s Tea Cakes, Nana’s Banana Pudding, Big Mama’s Sweet Potato Pie or Myrtle’s Best Peach Cobbler. They also offer vegan options, catering and a layaway program for their extravagant wedding cakes.

The story behind Angela Logan’s Mortgage Apple Cakes is compelling. A single mother who saved her home from foreclosure during the mortgage crisis by baking 100 cakes in 10 days. But it wasn’t just the media attention around her story that led to her success. Her apple-based desserts, including the Original Mortgage Apple Cake, was otherworldly. Online reviews like “the hype was real” and “my kids BEG for their cupcakes” serve as testimonies. With nationwide shipping, you can try out one of her apple-based desserts – including the Original Mortgage Apple Cake, the Apple Rum Upside Down Cake, the Caramel Apple Cake and the Apple Pound Cake with White Chocolate Drizzle – or one of her other baked creations. Enjoy them while streaming the movie depiction of her story, staring Kimberly Elise, on Amazon Prime or PureFlix.

Even though their cakes get rave reviews for how tasty they are, the real draw for BCakeNY is the realism and next-level artistry of their sweet confections. With cakes designed to resemble everything from Wendy’s chicken nuggets to Birkin bags, Frida Khalo and submerged mermaids, the women of BCakeNY bake up visuals feast that dazzle the palette before the first bite. Founder Miriam Milord started the business after making her own cake for a baby shower because she couldn’t afford one at the time. Now, her team of bakers are crafting desserts for celebrities like Rihanna, Cardi B and Michael Bublé (to name a few), as well as companies like HBO and JetBlue. Check out their cake jars or their holiday themed specials, like their Women’s History Month cupcakes and the Juneteenth Celebration Cake.

When Mignon Francois founded the Cupcake Collection, she didn’t even know how to bake. But she did know how to combine the right ingredients to make magic. Mignon, who says she was drowning in debt at the time, paired her daughters’ love for baking with her grandmother’s recipes and began selling the intergenerational treats outside of a tall window in the front of her family’s Nashville home. They have since gone on to top several “best of” lists around Nashville, expanded to include a second brick & mortar shop in New Orleans and reached $5M+ in revenue. Check out their popular Strawberry Lemonade Cupcake or the Sweet Potato Cupcake.

Yes, pressure makes diamonds, but it also makes iconic desserts. In 1983, as Harriet was facing the twin pressures of providing for a young family and proving that a Black businesswoman specializing in cheesecakes could be successful, her infamous Sweet Potato Cheesecake was born. The concoction stunned enough taste buds to help Harriet’s become a community landmark, eventually expanding to include 65 flavors. “Fresh ingredients are key in the making of our cheesecakes,” Ms. Harriet writes on her website. “Adding strawberries into our cream cheese mixture is an art, all of our flavors are not just toppings, I hand mix every cheesecake to perfection and adjusted my recipe to reduce the sugar content compared to other companies to ensure my diabetic son can still enjoy a sweet treat from time to time.”

What are some of your favorite Black-women owned bakeries?